With the first term of the Wikipedia Year of Science complete, and about six months into its launch date on January 1, the Wiki Education Foundation wanted to look at the impact student editors have had on Wikipedia’s science coverage.

Unfortunately, Wikipedia doesn’t label all of its science content as “Science!”, so we had to find a way to see what people were contributing to the sciences. That way, we’d be able to see which portion of that work came from student editors.

Wikipedia provides two pieces of data that we can use to get a pretty good approximation of which topics people write. First, WikiProjects, groups of editors working together to improve content coverage and quality in a given subject area. WikiProjects often leave tags on articles that help identify articles related to the project. Second, the WikiProject directory sorts these WikiProjects by subject. Fortunately for Wiki Ed, one of these subjects is science. Between these two sets of data, we can actually create a list of nearly all science articles.

Using that list of science articles, we can start answering some questions. Digging through the data for the past six months, we saw that Wiki Ed students had added 4,685,882 characters to science articles. Characters aren’t exactly an intuitive measurement, so let’s put this in the context of textbooks.

I have a couple textbooks sitting on my desk. Grabbing one, I see that it has 360 pages. Flipping to a random page, I count 308 words, about 4 characters each — plus one more for a space, giving us 5. Multiply all that together and we get 554,400 characters per textbook.

So, in six months, Wiki Ed students collectively produced 8 and a half new science textbooks.

Is the Year of Science making a difference?

That’s an achievement, but what does it really mean? And how many of those textbooks can be attributed specifically to the Year of Science? After all, students have contributed to science courses before. How much of this content is Wiki Ed just being Wiki Ed?

To get some perspective, I looked at the spring 2015 science numbers. That’s exactly one year before the Year of Science launched. 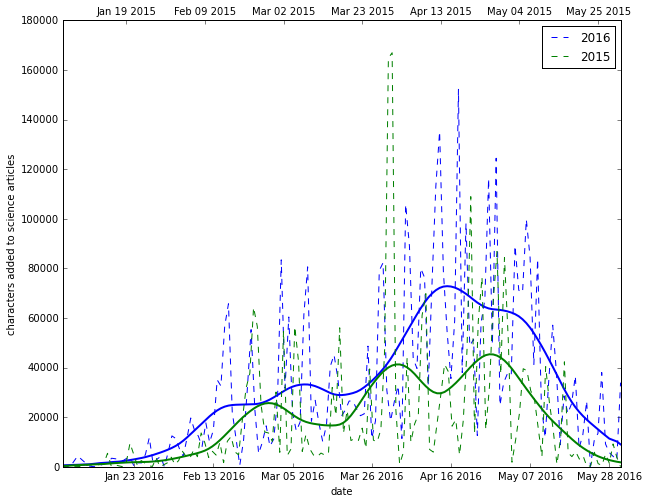 The graph above shows students’ contributions to science articles plotted over time. The dashed line represents actual daily totals, while the solid line is a smoothed version of the same data to make it easier to read the chart. We clearly see that throughout the semester, Wiki Ed is outperforming itself. In fact, looking at our year-to-year totals, we see an increase of 61.5%.

Student editors are contributing 61.5% more science content this year than last. That proves that the Year of Science has made an impact on student editing. But what does that mean for Wikipedia?

The impact on Wikipedia

We can use that figure to determine what proportion of science contributions came from Wiki Ed’s students, leaving aside the sporadic spikes in contributions that the graph above makes clear.

While that’s a big number, it also isn’t quite fair. No one really expects that much to be happening in classes in January. Student editors typically start contributing around the start of April to the middle of May.

That’s about 44 days of student activity. Doing the same math as above, 44 days translates to 46,640,000 characters contributed by volunteers. During that same time period, Wiki Ed students produced 2,644,569. This puts us at 5.7%. That is a surprisingly large number, considering the relative sizes of Wikipedia’s volunteer population and Wiki Ed’s student population!

We’re only halfway through the Year of Science, and the results are already impressive. Our students have produced the equivalent of 8.5 new science textbooks. We’ve increased student science output to Wikipedia by more than 60%. And during the most active time of the year, we’re producing 5.7% of all science content on Wikipedia.

I’m looking forward to seeing what the next semester holds!

The Wikipedia Year of Science 2016 is an unprecedented initiative to improve Wikipedia’s potential for communicating science to the public. If you’d like to get involved, please e-mail contact@wikiedu.org. Major support for the Year of Science is generously provided by Google and the Simons Foundation.