In early June, we published an evaluation of the Year of Science, our year-long campaign in 2016 to improve the quality of science information available on Wikipedia. Over the course of that initiative, more than 6,300 students added nearly 5 million words of content to 5,700 Wikipedia articles on STEM and social science subjects. The report covers what we did in each of our programs, explains what worked, what didn’t work, and what we learned, so that other Wikimedia program leaders can consult this report when planning other large-scale content initiatives.

Educational Partnerships Manager Jami Mathewson, Outreach Manager Samantha Weald, and Executive Director Frank Schulenburg joined faculty at Cañada College in Redwood City, California, a short drive from our office. We worked with an aspiring faculty learning community to identify ways they can bring meaningful Wikipedia assignments into their classrooms. The participants were engaged and engaging, asking smart questions about pedagogical benefits for students, and we look forward to working with more of their students in the future.

Later in the month, Jami and Samantha joined members of the American Society for Plant Biologists at their annual meeting. Since beginning our partnership with ASPB in the fall 2015 term, Wiki Ed has trained more than 700 plant biology students to edit Wikipedia. Together, they have added 337,000 words to articles that have received nearly 9 million views. Students have improved Wikipedia’s information about beech bark disease, carnivorous plants, the environmental impact of agriculture, North American azaleas, DNA sequencing, and many more. We’re proud of the great work they’ve done, and we can’t wait to work with new ASPB members.

Status of the Classroom Program for Spring 2017 in numbers, as of June 30:

With the Spring Quarter over in most schools, the Spring 2017 term has come to a close at Wiki Education. We’re supporting 27 courses during the summer session with 320 students; this smaller cohort means it’s an ideal time to reflect on the past term and rethink how to best support our courses.

During June, the Classroom Program team began to think about what projects to tackle over the summer. This meant looking at the instructor survey as well as impressions from the Spring term and evaluating data that we’ve been collecting for the past several years. Among the topics we’ll be exploring are how to provide instructors with better support for the grading and assessment of their Wikipedia assignments as well as identifying ways in which we can improve our timeline template and training modules. And as always, we’ll be discussing how to ensure the quality of our program, both in terms of Wiki Education’s support and student contributions to Wikipedia, as the program continues to grow.

Life is sweeter when you can be yourself, which is why Ray Hill works as an activist for LGBT issues, police and law enforcement issues, and prison issues. This man not only helped organize Houston’s first gay rights organization and its first gay pride parade, he also ran the successful radio show ‘’ The Prison Show’’, through which he married twelve prisoner’s loved ones by proxy. Hill was also featured in several documentaries, one of which dealt with his friendship with a man who was sent to prison for the death of Paul Brossard, a gay man who died after being attacked by ten young men. Hill was initially vehement that Brossard’s death was due to the men’s homophobia, a position he changed (despite criticism from supporters and Brossard’s family) after extended meetings with the young men involved with the attack. The article on Hill was added by a student in Bridget Schilling’s Human Development in Global and Local Communities class, who also discovered that when Hill came out to his labor organizer parents, his mother was relieved. She thought he was a Republican.

The challenge of conservation isn’t simply a matter of ensuring that individuals of a species survives. It’s also important to ensure that genetic diversity is maintained among the survivors. Students in Jeremie Fant’s Conservation Genetics class worked on a number of articles in this area. When large, continuous areas of habitat are subdivided by habitat destruction, contact between members of these newly subdivided populations can be cut off. Small populations are more susceptible to extinction thanks to a variety of factors, including a loss of genetic diversity. Restoring degraded habitat between these populations is one way to reestablish contact and gene flow between these populations. Restoration ecology is the science behind ecological restoration. Students in the class expanded these articles and other related ones.

Some species do well in human-dominated ecosystems. With more access to food and fewer predators, populations can grow to the point where they can have a harmful impact on the ecosystem. Absent natural predators, culling may be an effective way to manage these populations. Students in the class expanded the culling article by adding sections which its use in the management of white-tailed deer in the United States, and which discussed the use of contraceptives and other reproductive inhibitors.

Current Visiting Scholars continued to make high-quality contributions to Wikipedia. Gary Greenbaum, George Mason University Visiting Scholar, brought the article about Kalākaua coinageto Featured Article status. Kalākaua coinage are silver coins from the Kingdom of Hawaii, before it became a United States territory. The set, including a quarter dollar, half dollar, and dollar, were struck in San Francisco in 1883-84.

Barbara Page, Visiting Scholar at the University of Pittsburgh, continued her prolific improvements to Wikipedia’s health and medicine articles. Back in February 2016 she started an article about thrombosis prevention, which explains treatments that prevent blood clots from forming inside blood vessels. She continued to improve the article ever since, to the point it was labeled B-class this month. Similarly, the Benin ivory mask article, about a 16th century ivory sculptural portrait in the form of a mask, was developed by Smithsonian Institution Visiting Scholar User:Czar earlier in the year and upgraded to B-class in June.

Rosie Stephenson-Goodknight, Visiting Scholar at Northeastern University, continued to improve Wikipedia’s coverage of women writers this month. Among her many additions were Catharine Hitchcock Tilden Avery (1844-1911), founder and regent of the Western Reserve Chapter of the Daughters of the American Revolution; Frances Christine Fisher Tiernan (1846-1920), author of more than 50 novels using the pen name Christian Reid; Eliza D. Keith (1854-1939), an educator, suffragist, and journalist who wrote for many notable publications; and Kentucky-born poet Lillian Rozell Messenger (1844-1921).

This month we published two new subject-specific handouts for students assigned to contribute to Wikipedia articles about books or films. These printed guides provide succinct instructions and best practices to students, and are intended to supplement our interactive training and other materials. While some subject-specific handouts focus on a particular topic, others provide instruction on how to edit particular types of articles that encompass many disciplines. Articles about books and films tend to follow a standard format, with common section headings, organizational themes, and ways of presenting information. These new guides summarize structural elements and provide more general tips, best practices, and common pitfalls. You can access the handouts on Wikimedia Commons here: Books and Films.

In late June, Adam Hyland returned from medical leave in a new role as Data Analyst & Storyteller. Adam will be responsible for Wiki Ed’s blog, social media, and handbooks, as well as helping us answer some questions about our programs using data. We’re excited to have Adam help Wiki Education’s work in this new role.

This month we completed a support contract with Wikimedia Foundation, adding usability refinements for Programs & Events Dashboard along with a data download tool that provides course data in a spreadsheet-friendly format.

Our three summer internship projects ramped up in June, and some of the early work from these projects is live. Google Summer of Code intern Keerthana S created the first version of a tool to provided automated editing suggestions, which we’ll be getting feedback about and improving over the summer. Sejal Khatri, also a Google Summer of Code intern, has added some new visualizations to the dashboard’s user profile pages, fixed several usability bugs, and is now working on making the dashboard look better on mobile devices. Outreachy intern Medha Bansal is laying the groundwork for enabling automatic edits across multiple wikis for Programs & Events Dashboard — bringing one of the key features of the Wiki Education Dashboard to the global community.

Over the rest of the summer, alongside these internship projects, we’ll be working on updates to our assignment design tools, trainings, and help resources, and we’ll start working on a system for Wiki Education staff to better coordinate and track our Classroom Program work.

In June, Research Fellow Zach McDowell finished out his fellowship at Wiki Education. On June 14, we published two blogposts, one on the Wiki Education blog, the other on the Wikimedia Foundation blog, announcing the results of the Fall 2016 Student Learning Outcomes research. In addition to the research report, the data and accompanying tools were also released under an open license. Results showed students gain digital literacy skills and are more motivated by Wikipedia assignments, as well as several other findings.

In addition to the research report, Zach is finishing an article with Dr. Matthew Vetter for a top tier journal in Rhetoric and Composition, Computers and Composition. Before publishing the article, Zach and Matthew needed to apply for a grant to pay for the Open Access Article Processing Charge, which required Matthew to be added to the protocol. This process took time as the protocol needed to be approved by parties at both institutions. The article should be submitted before the end of July.

Our expenditures for the year were approximately at 80% of our planned budget.

As June is our year-end, these numbers are preliminary and pre-audit. Although no major adjustments are expected, ongoing year-end analysis and audit preparation may have some effect on these numbers. 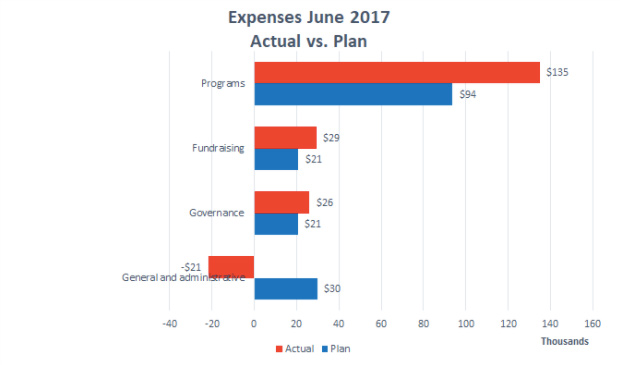 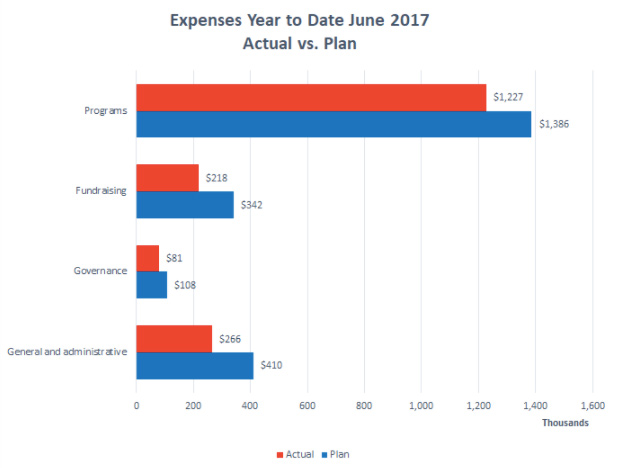 In late June, we welcomed TJ Bliss as the new Director of Development and Strategy. TJ is responsible for overseeing our development strategy, developing relationships with key decision makers in the philanthropy community, and working with Wiki Ed’s board on creating our next organizational strategy. TJ has spent the last three years overseeing the Open Educational Resources portfolio at the Hewlett Foundation. Prior to his time at Hewlett, TJ was the Director of Assessment and Accountability for the State Department of Education in Idaho. He was also a member of the Open Education Group at BYU and the OER Policy Fellow at the International Association for K-12 Online Learning. TJ has a Ph.D. in Education, a Master’s Degree in Biology, and Bachelor’s Degree in Molecular and Microbiology.

In mid-June, the board of trustees met for its annual meeting in San Francisco. Frank and Director of Programs LiAnna Davis presented the programmatic initiatives of next fiscal year to the board. After a thorough discussion, the board approved the new annual plan and budget. The Board and ED also engaged in a conversation about Wiki Education’s future relationship with the Wikimedia Foundation and Wiki Education’s role in the Wikimedia movement. As a response to the recent comments provided by the Simple Annual Plan Grant Committee, the board asked Frank to take a number of measures aimed at creating opportunities for the Wikipedia community to provide more input on our work.

Frank also met with Wikimedia Foundation ED Katherine Maher to discuss ways in which the two organizations can coordinate their work in the area of onboarding new users to Wikipedia.

Frank joined Jami and Samantha on a visit to Cañada College. While the main purpose of the meeting was to teach instructors about how they can bring “Teaching with Wikipedia” to their institution, it also provided a way for Frank to stay connected with what’s happening on the ground in Wiki Education’s outreach work.