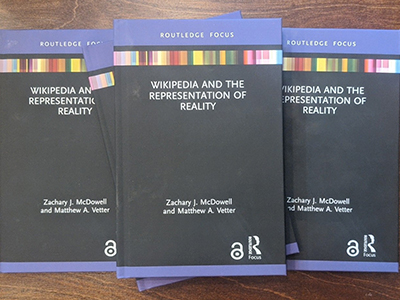 Wikipedia and the Representation of Reality is a new book by Zachary J. McDowell and Matthew A. Vetter that was published by Routledge this summer. The entire book is available for download free from the publisher or as a free Kindle download from Amazon.

Wikipedia is the encyclopedia that anyone can edit. Making a change to its content is as simple as clicking the edit button and typing something in. And more often than not, what happens next for new editors is that their addition gets reverted and is hidden from everything but the edit history of the page. In theory Wikipedia’s barriers to entry are very low, but the barriers to making a meaningful contribution to the encyclopedia’s contents are much, much higher. In some ways this is a good thing — Wikipedia’s exclusion of a lot of new additions helps it achieve the seemingly impossible task of presenting reliable, high-quality information on a wiki that anyone can edit. But it also means that Wikipedia’s base of contributors, the topics they choose to write about, the information they choose to include, and the way they choose to phrase their contributions is limited to the group of people who make it past these barriers.

For those of us who work on trying to expand the demographic profile of Wikipedia contributors, it’s important to understand the policies and processes that shape content inclusion and exclusion on Wikipedia. But even a basic understanding of the key policies and processes can take years to grasp. A nuanced understanding of how they play out in practice — both the written and unwritten rules — is even more difficult.

This is what makes Wikipedia and the Representation of Reality such a valuable addition to the growing collection of scholarly and popular writing around Wikipedia. Zach McDowell and Matt Vetter are experienced members of the community of Wikipedians and educators who have been incorporating Wikipedia assignments into their teaching over the last decade. Both Zach and Matt have worked with Wiki Education for years both as instructors and, in Zach’s case, as a research fellow.

Over the two decades of its existence, Wikipedia has grown to the point where it has become the encyclopedia. Instead of explaining Wikipedia as an online encyclopedia, we now explain other encyclopedias in relation to Wikipedia. While Wikipedia’s policies on inclusion and exclusion were meant to limit its coverage to reality and avoid hoaxes, the project has come to shape reality, or at least shape what’s important for the many of its readers: if it isn’t covered, is it really that important?

In the book, Zach and Matt take a careful look at key policies and try to tease out a lot of the underlying assumptions of the policy-writers. From the perspectives of the early techno-utopian Wikipedians, a statement like “Be Bold” was a way of telling potential contributors that they didn’t need to ask anyone’s permission to make Wikipedia better. But for a different audience, this means something different; the book quotes their students as saying they “ultimately felt more anxiety than boldness” and found themselves “afraid to upset, anger, or disappoint” the original authors of the work they were editing.

These disconnects between policy as designed and as interpreted, between intent and effect, are the kinds of things that have kept Wikipedia from being what it was designed to be.

By looking at the interplay between policy and the way that policy is applied, Zach and Matt manage to introduce readers to the importance of the community aspect of Wikipedia. Many of Wikipedia’s readers don’t understand that behind the text, there is a community of individuals with different ideas and opinions of how to interpret policy. When someone reverts your edit, it isn’t Wikipedia, it’s a certain Wikipedian. Unlike a top-down organization where there’s someone who can decide what a policy means and how it’s going to be interpreted, the application of policy on Wikipedia is a socially constructed reality built through a process of discussion, debate, and negotiation. The book explains this by invoking Steven Thorne’s “culture-of-use” theory, which provides a conceptual framework that is likely to help people who are new to Wikipedia make sense of this sort of thing.

By creating a framework for understanding Wikipedia, I believe that the book will open up Wikipedia for a wide range of people. The book is an academic work (albeit a very readable one) and should be a necessary primer for anyone interested in studying Wikipedia. But it’s also very helpful for Wikipedians who are interested in fixing its problems. The book is a critique of Wikipedia, but it’s written by people who love the project and are optimistic about its future. Far too often Wikipedia is either written about in purely positive terms or it is dismissed as hopelessly exclusionary and sexist.

As a person who has spent much of the last 17 years thinking about and interacting with Wikipedia policy and its impact on knowledge, existing editors, and new ones, this book gave me a lot to think about. I didn’t agree with everything they said in the book, but even when I disagreed it tended to be over matters of interpretation rather than matters of fact. I love the fact that I finally have a source I can reference instead of feeling the need to explain everything from first principles.

I highly recommend this book to anyone who wants to know more about how Wikipedia works, or who wants to make Wikipedia better. The fact that they were able to release it under an open license means it’s freely available (either as a .pdf or through Amazon’s Kindle store) and easily accessible to anyone who has the time.

You can watch a presentation about this book from WikiConference North America here.