The paper, “Time-series Analyses of the Editors and Their Edits for Adding Bibliographic References on Wikipedia”, was published in the Journal of Japan Society of Information and Knowledge, Vol. 31, No. 1, 2021. The text is in Japanese.

Two figures from the paper show Wiki Education’s impact on these numbers. The researchers excluded bots and IP addresses (unregistered editors), looking only at registered users who were adding scholarly citations to English Wikipedia. 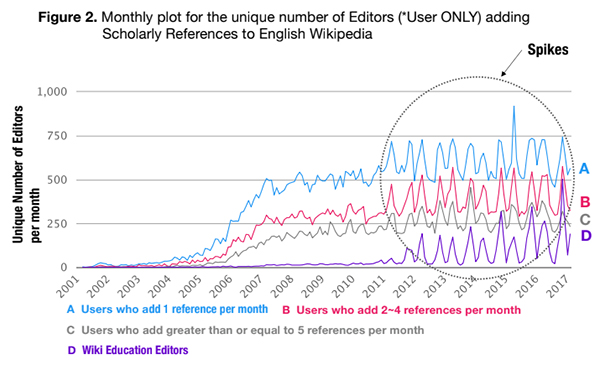 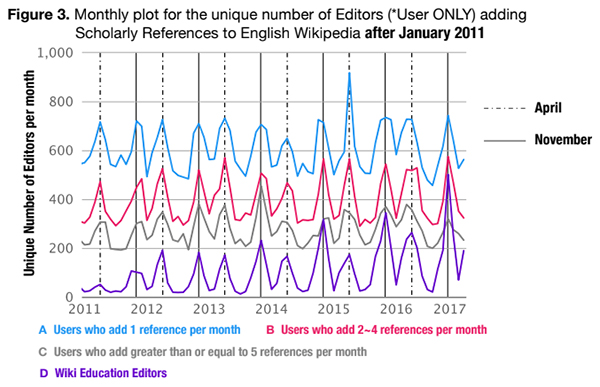 The researchers built the dataset using the data dump of English Wikipedia as of March 1, 2017, meaning the latest year in this study is from 2016. Even in 2016, Wiki Education’s student editors represented 15.5% of all registered non-bot users on English Wikipedia who added scholarly citations. In 2016, the program had about 10,000 students participating; last year, more than 16,500 students participated, meaning we expect that percentage has only grown over time.

I’m always gratified to see external researchers identify editing patterns of our program participants as an important area of study. We enable any researcher to download usernames of our participants through our Dashboard, and we are happy to answer any questions that arise. Many thanks to Jiro and colleagues for their excellent study.