The Wiki Education Foundation’s first full term supporting the Classroom Program concluded last month, with 65 courses adding the equivalent of 7,300 printed pages to the English Wikipedia. Overall, 1,852 student editors enrolled in these courses, and 1,378 of them made at least one edit to the article namespace.

One-third of the student editors completed the online student training, since more instructors include the training as a required assignment early in the term. Early education about Wikipedia policies and writing expectations has led to fewer incidents arising from student editors in the Classroom Program. In fact, there were zero incidents this term in Wiki Education Foundation-supported classes, a huge testament to the importance of preparing student editors, both with training and with assignments designed to fit on Wikipedia. 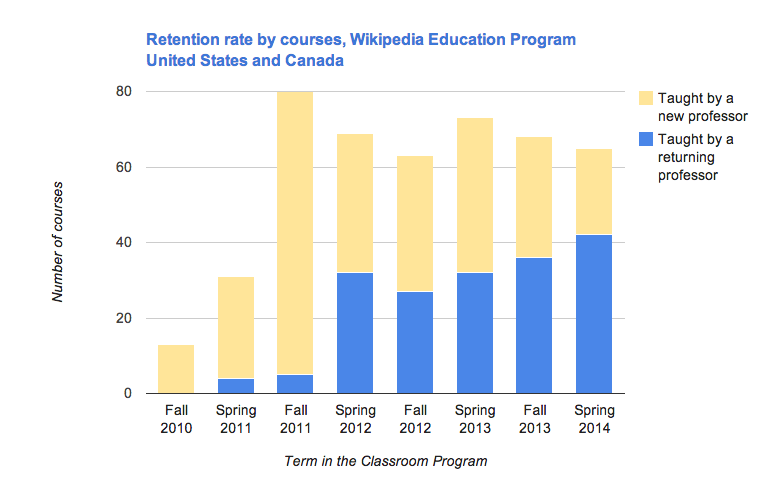 As illustrated in this chart, the spring 2014 term had the most experienced instructors of any other term. About 65% of the courses had instructors who had used Wikipedia as a teaching tool in the past four years. Since the courses taught by experienced instructors tend to have high quality outcomes on Wikipedia and require fewer volunteer and staff resources, the Wiki Education Foundation aims to retain instructors. Take Dr. Alex Webb at Louisiana State University, who has participated in the Wikipedia Education Program since the fall 2011 term. Student editors in this term’s Development of the Terrestrial Planets course created 15 new articles. Nine of them, including Mountains of Io, Guinevere Planitia, and Martian lava tube, were featured on the front page of Wikipedia in the “Did you know” section, and the course’s articles have already been viewed more than 60,000 times.

Though new instructors may not have experience using Wikipedia as a teaching tool, they have access to an online training, step-by-step guides, and advice from both Wikipedia Ambassadors and the Wiki Education Foundation Program Manager to support them in designing assignments that meet their learning objectives and positively impact Wikipedia. Student editors from both new and returning courses created 253 new articles, edited 2,639 total articles, and added 1,381 files to Wikimedia Commons. Over the last 3 months, readers have read these articles more than 96 million times, meaning our student editors are making a difference in getting people the knowledge they’re looking for. Check out more examples of contributions from this term that are having such a big impact on the world’s knowledge.

After four years of the Wikipedia Education Program United States and Canada, the impact from student editors has been outstanding. Since the first term in fall 2010, more than 9,000 student editors have created accounts on English Wikipedia. They have edited more than 16,000 articles, including 1,900 new articles. One of the best things about Wikipedia classroom assignments is that student editors are not contributing to just any articles. They help fill significant content gaps that still exist on Wikipedia. Over the past four years, we have worked with 11 women’s studies courses, 31 English courses, 35 sociology courses, and 61 communications courses, disciplines whose depth of coverage is often underrepresented on Wikipedia.

After seeing such positive outcomes from this previous term, we look forward to the work from student editors as the program grows to more instructors and universities in United States and Canada!