In mid-December, the Programs team participated in a half-day retreat. They engaged in team-building and discussed the evolution of the Classroom Program and Visiting Scholars as well as lessons learned. The purpose of the retreat was to continue the onboarding of Director of Programs Tanya I. Garcia, establish rapport among team members, and set the stage for work in 2016 and beyond.

In early December, Jami Mathewson and Samantha visited faculty at the University of California, Berkeley, for a presentation about teaching with Wikipedia. They met with more than 30 instructors in departments ranging from American cultures, to plant biology, to Spanish. Instructors had many questions about Wikipedia assignments and the impact students can have on public scholarship.

Samantha and Jami hosted a half-day workshop at the Society for Marine Mammalogy’s annual meeting in San Francisco. The workshop had four themes:

A dozen participants spent an hour reviewing Wikipedia articles in their areas of expertise. They documented their analysis to help others improve the quality of those articles.

The outreach team spent most of the month preparing for the spring 2016 term and the kick-off of the Year of Science. The team is proud to have on-boarded 39 spring courses in December, compared to 10 courses at the end of December 2014. Since then, we’ve identified peak periods for reaching out to instructors, and expanded staff time and attention to ensure those instructors have the support the need to participate.

Wiki Ed’s partnership with the National Women’s Studies Association continues to flourish. This fall, we supported 26 courses and nearly 700 students in women’s and gender studies courses. These students added 437,000 words to 553 articles, primarily about women, women’s studies, gender studies, and feminism. Here’s a sample of the articles improved by students:

We’re excited to bring students to Wikipedia to contribute to the public scholarship of these important topics.

Status of the Classroom Program for Fall 2015 in numbers, as of December 31:

The fall 2015 term saw some big changes to the Classroom Program. At the beginning of the term we launched dashboard.wikiedu.org, and shortly thereafter, ask.wikiedu.org, which contributed greatly to our ability to support what has become our largest number of classes and students to date. From spring 2015, we saw a roughly 40% increase in the number of courses in our program, and a 60% jump in the number of students enrolled in these courses. The dashboard allowed instructors and Wiki Ed staff to more easily follow student work, ensuring that quality and quantity went hand-in-hand.

Ruth Kittner’s class at Carnegie Mellon University was embroiled in the politics and personalities of the French Revolution, working on 17 articles in the topic area. They expanded articles on politicians, plots, and broader social history all during the month of December. Their largest expansion took Wikipedia’s article on the Declaration of the Rights of Woman and the Female Citizen, Olympe de Gouges’ feminist tract that spurred Mary Wollstonecraft to write A Vindication of the Rights of Woman and led to her arrest for treason.

Westchester University’s History on the Web, taught by Janneken Smucker, asked students to focus on Philadelphia history. User:Smithje2012 expanded the article on the Philadelphia Tribune, the oldest continually published African American newspaper in the United States. Before this term, the article had been a largely unsourced stub for almost a decade. Now the article is cited to multiple journal articles and offers a history of the paper.

Karyl Ketchum’s students at California State University, Fullerton explored a variety of topics in their course on Gender and Technoculture. Students have been working throughout the term to expand articles such as women in government, women and video games. All told, the class worked on 45 different articles. Many of the students added to existing articles, but some created new articles, such as a biography of Rose Lavelle, a member of the US Women’s National Soccer Team, and an article on the protest movement Blue Lives Matter.

Insects that go through all four developmental stages (egg, larva, pupa, and adult) exhibit holometabolism (also called ‘complete metamorphosis’). A student in the University of Chicago’s Evolution and Development class doubled the size of the holometabolism article, adding two paragraphs on the evolutionary context and and another five discussing theories on the evolution of this developmental sequence.

Students in North Dakota State University’s Mineralogy class created 16 new articles about minerals. These include George-ericksenite, a 3000-word article about a yellow mineral named after USGS geologist George E. Ericksen. Several of the articles created by the students were about minerals named for famous geologists including Bobdownsite, named after University of Arizona professor Robert Terrace Downs; and Waterhouseite, named for Australian geologist Frederick George Waterhouse. The class created two articles, Allendeite and Hexamolybdenum, minerals which were first discovered in the Allende meteorite that struck the earth in 1969.

Community Engagement Manager Ryan McGrady focused on preparation for the Wikipedia Year of Science, including developing collaborations with WikiProject Women in Red, WikiProject Women Scientists, the WikiCup, and others in the Wikipedia and academic communities.
Two articles by George Mason University Visiting Scholar Gary Greenbaum, Template:Wuser, were promoted to Featured Articles, the highest quality designation on Wikipedia. These articles were Wendell Willkie, about the Republican candidate in the 1940 presidential election who lost to FDR, and GMU’s namesake George Mason, father of the American Bill of Rights. Boroughitis, another of Gary’s articles (see our blog post from November), appeared on Wikipedia’s main page on December 2 as “Today’s featured article,” bringing increased visibility and recognition for the quality of that article.

On December 18, the Main Page of Wikipedia included the following “Did You Know”, based on an article by University of Pittsburgh Visiting Scholar Casey Monaghan:

Did you know “that in 1917, future folk musician and Carnegie Institute of Technology professor emeritus Robert Schmertz was arrested while dressed in ‘a girl’s middy blouse and a small white hat’?”

Barbara Page, a Visiting Scholar also at the University of Pittsburgh, created a chart (top of section) for use in a new article she wrote on chest pain in children.

Communications Manager Eryk Salvaggio has spent most of December creating and refining content for the new online training tools. This feedback came from user testing with first-time instructors, alongside Product Manager for Digital Services Sage Ross. Adjustments were ongoing through December, but the training is now live and ready for new instructors and new students.

In December, we rolled out major improvements of a couple of key areas of dashboard.wikiedu.org:

Along with a number of smaller interface refinements and bug fixes, those three updates address the most significant user experience pain points we identified in fall 2015. We’re looking forward to in-depth user tests for the new student training modules, which we will continue to refine into January.

Alongside the Dashboard system, we started planning something new in December: a social media tool for the Year of Science to help people share the joy they find in Wikipedia. Executive Director Frank Schulenburg and Director of Program Support LiAnna Davis joined Sage in Seattle for a planning sprint in the offices of our development partner WINTR. This project — we’re calling it the ‘Wikipedia playlist’ — will launch in February. 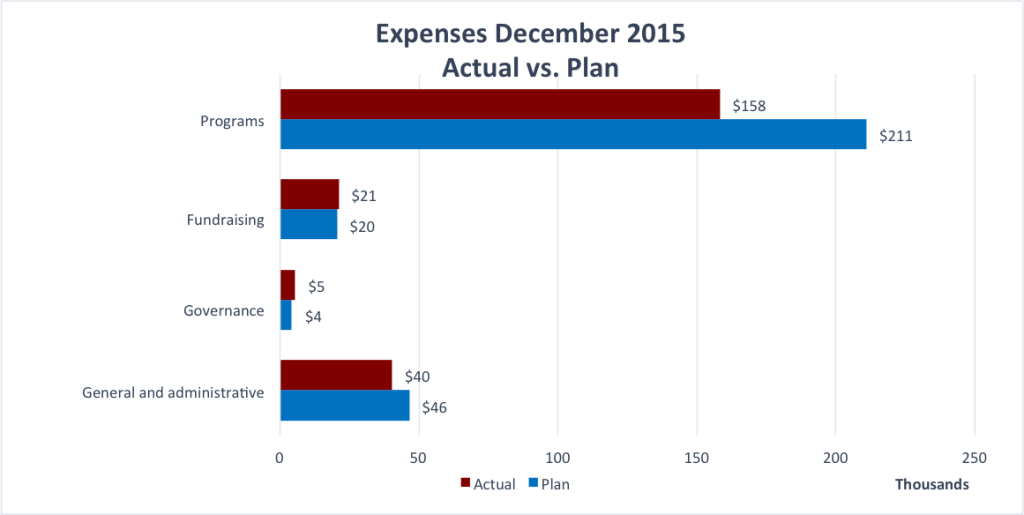 In December, we received funding from the Simons Foundation ($350k), Google ($500k), and individual contributors ($44k). Expenses were $225,184 versus the plan of $282,321. The main cause for the $57k variance was an earlier decision to hold off on expanding office space and staffing until we had a better handle on long-term funding. 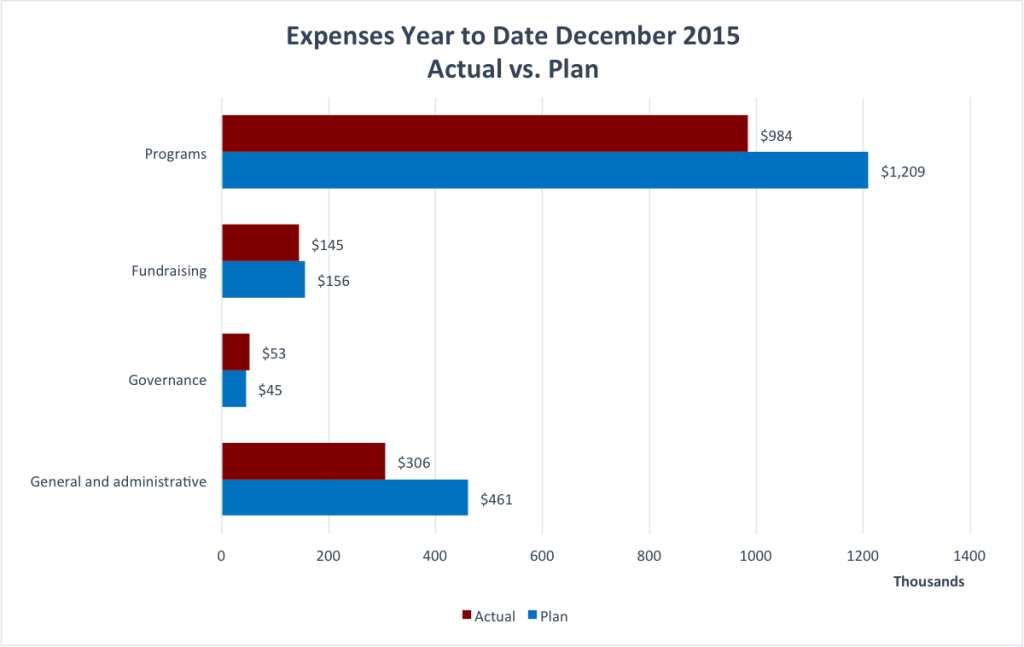 Our current spending level has averaged and maintained at 80% of planned over the last 3 months.