In early October, Outreach Manager Samantha Erickson met University of San Francisco faculty to discuss the Visiting Scholars program. As a result of that meeting, USF plans to sponsor two Visiting Scholars in 2016.

After less than a year of formalizing a partnership with the National Women’s Studies Association, Wiki Ed is supporting 25 women’s studies courses during the Fall 2015 term — 16% of all supported courses this term. Targeted outreach and support has proven to be a huge success, and we look forward to expanding our partnerships for similar outcomes. At WikiConference USA, Educational Partnerships Manager Jami Mathewson presented her work with the National Women’s Studies Association as a model example for the benefits of partnerships with academic associations.

Status of the Classroom Program for Fall 2015 in numbers, as of October 31:

The Classroom Program team has been busy working with more than 3,000 enrolled students. This marks our largest number of classes and students to date.

We’re supporting a considerably larger number of students as compared to spring 2015 (2,290 students). Our course Dashboard and help site, ask.wikiedu.org, have improved the quality of staff support to instructors and enabled us to provide guidance to more students. With most of our students well into the editing part of their assignments, we’re eager to see the impact these tools make in the quality of student contributions.

The Wiki Ed team heard firsthand from several instructors at WikiConference USA 2015. Matthew Vetter (Ohio University), Zach McDowell (University of Massachusetts, Amherst), and Ximena Gallardo C. (CUNY LaGuardia), all longtime participants in the Classroom Program, presented their models for Wikipedia assignments. We also had a chance to speak with Jason Smith and Ann Matsuuchi (CUNY LaGuardia) and meet a few of their students. In another presentation, Wiki Ed board member Chanitra Bishop presented on the variety of Wikipedia assignments she has encountered in her work as a librarian.

Classroom Program Manager Helaine Blumenthal and Samantha presented to medical students in Amin Azzam’s course at the University of California, San Francisco. What we heard in these encounters is that, despite the extra effort associated with a Wikipedia assignment, students and instructors find it a meaningful and rewarding experience.

We’re already planning our instructor onboarding for spring 2016. We’re looking to the upcoming Year of Science and exploring ways for students to contribute to this exciting initiative.

Throughout October, Ryan has also been working with Samantha and Jami to expand the Visiting Scholars program, conducting outreach and entering conversations with contacts at institutions interested in sponsorships. That team has been developing strategies to bring Scholars on board to work on science-related topics for the Year of Science campaign.

Communications Manager Eryk Salvaggio spent the first half of October preparing for, and following up on, WikiConference USA 2015. The event was live-streamed on YouTube, and up-to-date information, quotes, and resources were shared through Wiki Ed’s social media channels. Eryk also recruited several presenters on education-related topics to contribute to wikiedu.org.

Dr. Diana Strassmann, board chair of the Wiki Education Foundation and Carolyn and Fred McManis Distinguished Professor in the Practice at Rice University, was interviewed for a segment on Wikipedia’s role in education for the American Public Media program American RadioWorks, which explores “the people, ideas, and innovations that are changing education in the 21st century.”

The biggest digital infrastructure news from October is the official launch of ask.wikiedu.org, our new question-and-answer site. Product Manager Sage Ross set up our custom instance of the open source Askbotplatform, and the Programs and Program Support teams seeded it with more than 150 of the questions that come up most often from instructors and students. A search bar is now integrated into the Dashboard, and we’ve already seen instructors start to use it on their own to read existing answers and ask new questions.

Our main work with our WINTR development partners this month focused on the upcoming in-Dashboard training system. We have a prototype of the new system up and running, including draft content for updated instructor and student training, and we expect to beginning testing it with first-time instructors in November, ahead of a planned roll-out for all Spring 2016 courses. 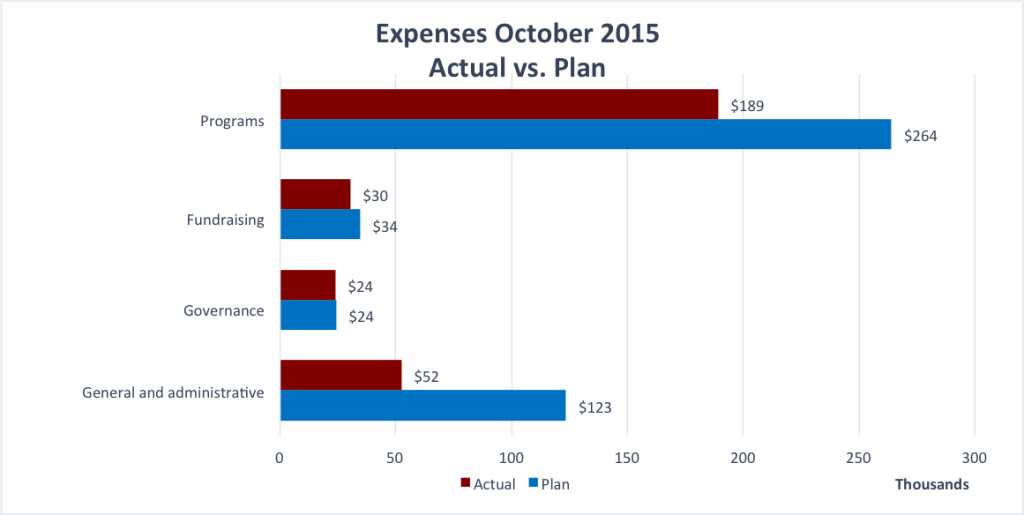 For October, expenses were $295,806 versus the plan of $446,259. The main cause for the $150k variance is two-fold: One of timing ($12k in hiring delays; $11k audit fees; travel expenses $14k; WikiCon expenses $24k) and the other resulting from postponing certain expenses until we have a better grasp on our funding flow. These include $62k for moving/expansion plans; design services for $13k and equipment for new staff $6k.

Our current spending level is averaging at 80% of planned.

On October 12, the Wiki Education Foundation’s board held its first in-person meeting of the Fiscal Year 2015/16. After Executive Director Frank Schulenburg and Director of Program Support LiAnna Davis reported on the current state of the organization, the board discussed the organization’s future development work, followed by reports from the Mission / Vision, Nominating, and Audit Committees.